Zeolife particles are negatively charged “nano-cages”. Each tiny cage has a negative charge to attract positively charged toxins and heavy metals out of tissues and blood and into those cages. The Zeolife cages are then flushed out through normal bodily functions without endangering other tissue.

While Zeolife is slowly traveling through the small intestines, the millions of tiny hair-like intestinal villi are coated with Zeolife. The villi are the nutrient absorbing gateways from the intestines to the bloodstream. From there the blood gets purified by Zeolife without crossing the blood brain barrier.

The mechanics of this process eliminates the possibility of toxic materials re-entering other organ tissues after being flushed out. It’s truly a chelation process.

Adsorption is the process of electronically attracting and binding rather than absorbing like a sponge. So Zeolite adsorbs and chelate’s heavy metals and toxins. 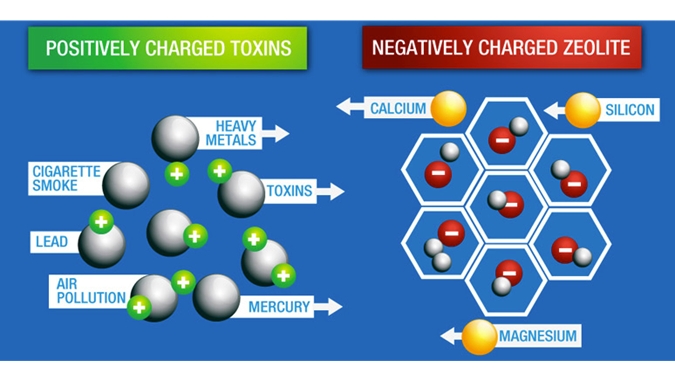 Zeolife incorporated into the animal’s diet can reduce the harmful effects of aflatoxin because it strongly absorbs aflatoxins and zearalenone and therefore reduces the need for antibiotics. Mineral adsorbents based on natural Zeolite and bentonite can be used in animal diets in order to prevent poisoning caused by mycotoxins. Zeolife incorporated into the animal’s diet at 1% to 2% was evaluated for the ability to reduce the harmful effects of 2.5 mg total aflatoxin on broiler chickens.

As enhanced adsorber Zeolife also acts as adsorber of:

Previous tests show that after the dietary administration with 2.5, 5.0 and 10% Zeolife, the elimination of Cesium 137 increased and the radionuclide deposition in liver, kidneys and muscles decreased. The Zeolife decontamination effects were observed with the preventive administration, as well as with sorbent administration from 24 h after a single contamination of brown rats.